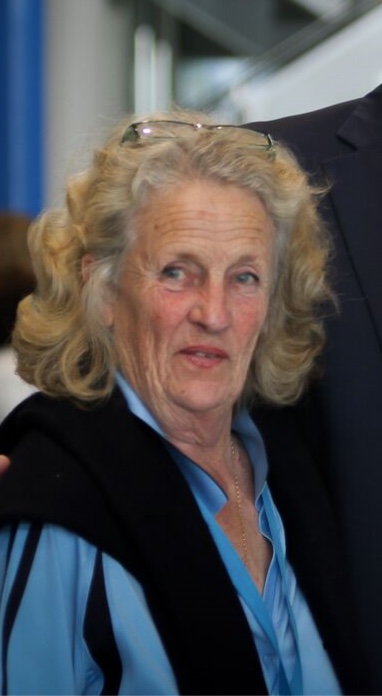 Sue Edwards was the driving force behind synchronised swimming in New Zealand, having been involved in the sport for over 56 years.

Back in the early 1960s, she fell in love with the grace, elegance and physicality of synchro as a swimmer, which sparked a life-long interest. That interest took her from being an athlete to coaching, judging, refereeing, administration and governance here in New Zealand where she has led the sport for close to 20 years, retiring in late 2016. While retired, she still had an active interest in the sport – and shared her wisdom and experience with many of us as we worked to fill her very big shoes. There’s not much she didn’t know about synchro!

She also had leading roles on international bodies – the Oceania Swimming Federation and FINA (the International Federation of Aquatic Sports) through the TSSC (Technical Synchronised Swimming Committee) which she was a member of for over 25 years, helping to grow, develop and drive the sport across the globe. She travelled the world, spreading her knowledge through these roles and her role as a FINA Judge Evaluator and Educator since 1997.

She is (and will always be) a life member of Synchro Swim NZ, has been recognised by FINA for her outstanding service and in 2017 was awarded the CNZM in the Queen’s Birthday Honours. Her skills and wisdom is sadly missed – as is the warmth and strength of her personality, and her passion for the sport that was a big part of her life.

A very special woman who touched so many lives - a reminder of what a difference one woman can make to so many lives.

In 2018 SSNZ insitgated a "SPIRIT OF SYNCHRO" award, in honour of Sue - that will be awarded to an individual in whatever role - Coach, Manager, Administrator, Athlete, Judge - who embodies the spirit of synchro, as Sue did.  Clubs will be asked to nominate individuals for this award as part of the Awards process each year.